Home » About Us
About Us

Paphnoutios the Martyr & his 546 Companions in Egypt

Synaxis of the Most Holy Theotokos of Evangelistria, Mochos

Our Righteous Father Sergius of Radonezh

Luke 4:22-30
Visit the Online Chapel for more daily readings, hymns, a monthly calendar of saints and feasts, and more.
Our Faith • History
The Church has her origin with Jesus Christ and the Holy Spirit, not with a human teacher, or group, nor a code of conduct or religious philosophy. Learn more»

Welcome to the Cathedral — A Brief History and Guide 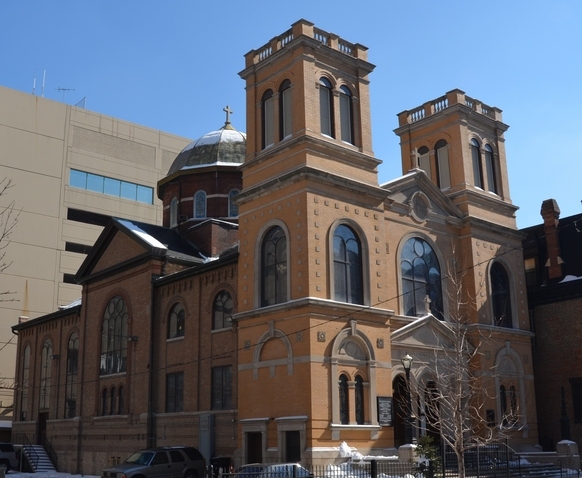 Centrally located near the heart of the city, the Annunciation Greek Orthodox Cathedral is the oldest church edifice built specifically as a Greek Orthodox Church in the Metropolis of Chicago.

Established by the original Greek Orthodox community in the city in 1892, the church was built on its present site in 1910 and faithfully models the Byzantine-Renaissance style of architecture.

Throughout its sacramental life the community and her clergy have served every level of society through a wide range or programs and services. As Cathedral for the Metropolis of Chicago, the church serves as a focal point for major Metropolis ministries such as the "Feed the Hungry" program, and Metropolis and Clergy conferences.

As cathedral, the Church of the Annunciation is the seat of the Metropolitan of Chicago, spiritual father and bishop to 58 parishes and two monastic communities in the states of Illinois, Indiana, Iowa, Minnesota, Missouri and Wisconsin.

About the Orthodox Church

As you visit or pray with us, use this brief guide to enhance your appreciation of the Greek Orthodox Christian Faith.

Upon entering the church you have left the secular world and stand in sacred time and space. The architecture and iconography is conceived to impart that awareness. A place where one, in the words of the psalmist, "gives thanks to The Lord... and sings praises to His name." — Psalm 9:1-12.

The Annunciation Cathedral is built in the shape of a cross with the central dome bearing the icon of Christ as Pantocreator, Lord or Creator of the universe. Thus, as Christ's victory over death is central to the Orthodox Faith, so Christ as Lord looks down from heaven upon the assembled faithful as a reminder of His eternal presence.

The church edifice is divided into three sections. The narthex is the vestibule area and represents this world in which man is called to repentance. Candles are lit as a symbol of the light of God's grace in the world. In the early church the narthex was also the place for baptismal candidates (catechumens).

The nave, which is the central portion of the building, represents the kingdom of heaven and our passage from the narthex into the nave symbolizes the Christian's entry into that kingdom. It is the area assigned to the faithful. The soleas, which is the raised platform between the nave and the sanctuary, is the area reserved for sacraments and liturgical services.

The sanctuary is the holiest part of the temple and the entire architecture and iconography of the church centers our attention on the Holy Altar within the sanctuary. The nave is separated from the sanctuary by an icon screen or iconostasis. Gates, called royal doors in the center of the screen lead into the sanctuary and altar area and are used only by ordained Orthodox clergymen.

Inside the sanctuary is the Holy Altar holding the tabernacle, Gospels book, candles and holy vessels used during the Divine Liturgy. The gates at either side of the icon screen are called the deacon's doors and are used for processionals and recessionals out of and into the sanctuary. In the sanctuary there is a small altar behind the icon screen and to the left of the main altar. This is called the table of oblation or table of preparation. For it is here that the people's gifts of bread and wine are prepared before the Divine Liturgy and later carried in solemn procession to the Holy Altar.

To the right of the iconostasis and in front of the chanter's station is the throne of the bishop, who is the head of the Church and Christ's representative to the people. On the throne is an icon of Jesus Christ, the High Priest.

To the left of the iconostasis we find the pulpit from which the Holy Gospel is read and the sermon may be preached. The pulpit symbolizes the stone which sealed the entrance to Christ's tomb at which the angel proclaimed the "Good News" of the resurrection to the women who had come to anoint the body of our Lord.

The icons which adorn the dome, apse, walls and balcony area of the Cathedral are images of Christ, Virgin Mary the Theotokos, the Fathers of the Church, the Saints, and events in the life of Christ.

May the grace of our Lord's love give you strength and the beauty of His house give you peace.